It’s spring and wedding season is in full swing.

Amid all the dancing and champagne toasts, someone will inevitably ask, “So when are you two getting engaged?”

When navigating this awkward question, you must stifle the urge to turn your dagger stare upon your lover, poke them in the ribcage and ask, “I don’t know, WHEN ARE WE GETTING ENGAGED?”

Chances are good he’s already been asked the same question at least 20 times.

I usually just shrug and continue doing the Cupid Shuffle because, honestly, I have no freaking clue.

After three years of dating, it could happen days, months or years from now.

But at this point I’ve gotten good at ignoring the pressure. I’ve stopped stressing every time someone’s great-aunt pinches my cheek and says, “You’re next!”

For me, the important part is knowing there will be a proposal some day. I know this because before I even moved in, Robert and I mutually agreed that he would eventually make an honest woman out of me.

Or at least attempt to.

Even though I am positive I want to marry Robert and raise giant mustachioed lumberjack babies with him, I have learned to cherish our current situation for all that it is, instead of all that it is not.

It’s great to know where you are headed together in life, but that doesn’t mean you need to fast forward to the “happily ever after.”

Even if you do see yourselves heading to the altar eventually, it’s up to you whether you want to walk, run or dance down the aisle.

Putting pressure on your relationship to reach certain milestones by a particular deadline will only add tension to something that is just getting good.

It’s totally natural to get impatient and antsy, wondering when the big moment will come. All of your Facebook friends are getting engaged, so why aren’t you?

Not to mention that if you’re expecting a ring, they don’t just appear out of thin air. You kind of have to save up for them, unfortunately.

Yet another layer of pressure on your relationship comes from an unexpected source: the people who love you.

Because your nearest and dearest care and want the best for you, you have to prepare yourself for unsolicited advice about how they would handle your relationship differently or what your timeline should be.

Some will not approve of you living together before marriage and hope you get hitched soon so they can gloss over this stage like it never happened. Others will insist that you should have at least held out for a sizable rock before moving in. A small faction will scoff at the fact that you are even considering settling down at all.

The most exasperating are the few well-meaning acquaintances who gleefully recount the disastrous details of their friend’s cousin’s sister-in law’s cohabitation experience that ended with someone’s clothes on fire in the front lawn.

But even if you give it a try and someone still ends up burning your clothes in effigy, it’s a hell of a lot cheaper than a divorce. Hopefully the only custody battle you have will be over the couch you pooled your tax returns to buy.

For now, enjoy what’s right in front of you.

Living together is an awesome time where you get to learn everything about each other and spend more time together than ever before.

This life stage does not get enough credit for being a commitment in and of itself that is worth relishing and celebrating.

So even when you start to get impatient, trust in the love and life you have built together and know that things will happen in their own time.

If you put as much effort into strengthening your relationship as you do stalking Facebook albums of former friends’ weddings, you will be much happier.

And maybe try to cut back on the hint dropping. Trust me, he gets it. 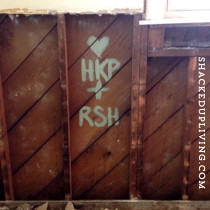 A few weekends ago I returned from a long bachelorette trip to Harry Potter World to find that Robert had retiled our bathroom as an incredibly thoughtful and romantic surprise. Unfortunately, he miscalculated how long it would take for the... END_OF_DOCUMENT_TOKEN_TO_BE_REPLACED 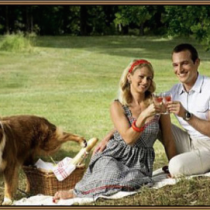 Robert and I are not the most romantic folks. Sure, we occasionally grope each other in public (Actually, Robert says I have to stop doing that,) and tell each other “I love you,” but Valentine’s Day has never been a... END_OF_DOCUMENT_TOKEN_TO_BE_REPLACED 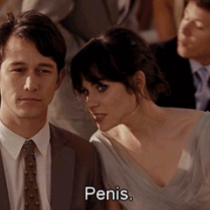 Robert deserves a friggin’ medal. Not a ribbon. Not a certificate. A medal with his face on it. “Why?” you ask. Because he has chosen to love– and live with– allllll of this. I have a very limited filter, the... END_OF_DOCUMENT_TOKEN_TO_BE_REPLACED 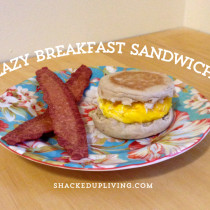 I am NOT a morning person. I snooze the alarm at least two to three times, and then spend about 10 minutes flopping around in the covers, whining like a pouty toddler. After finally rolling my bedraggled behind out of bed, I... END_OF_DOCUMENT_TOKEN_TO_BE_REPLACED 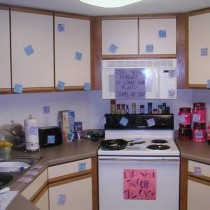 Leaving roommates behind to shack up with your sweetie is very exciting. So long, random Craigslist roommate! Auf wiedersehen, roomie who wears your clothes without asking, even though you’ve explicitly told her not to! It may be better than putting up with... END_OF_DOCUMENT_TOKEN_TO_BE_REPLACED 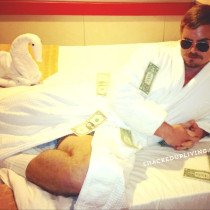 Although we exude an air of class and poise (HA!) characteristic of the upper-crust, Robert and I are very much bottom-crust. Despite our entry-level salaries and mounting financial responsibilities, Robert and I lead a fairly comfortable lifestyle, thanks to our penny-pinching ways.... END_OF_DOCUMENT_TOKEN_TO_BE_REPLACED 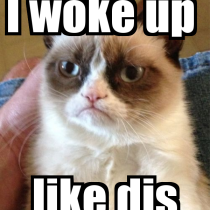 I Woke Up Like This Beyonce is a lying hussy. When you live with your lover, it’s impossible to pretend that you woke up looking like a radiant goddess. I generally arise looking like a grumpy, nearsighted Asian man with... END_OF_DOCUMENT_TOKEN_TO_BE_REPLACED 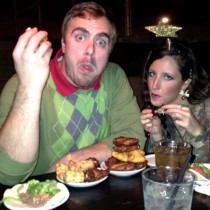 Get In My Belly Anyone who knows Robert and me, knows that free food is one of our great passions in life. We know all the antique stores in the area that give out candy, donuts, and even sometimes have... END_OF_DOCUMENT_TOKEN_TO_BE_REPLACED 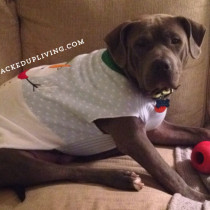 I swear I need to start drinking bottled water at work. The number of baby showers I have been to this year alone, makes me wonder if they are putting fertility drugs in the watercooler. Although watching half a dozen... END_OF_DOCUMENT_TOKEN_TO_BE_REPLACED
« Older posts