Leaving roommates behind to shack up with your sweetie is very exciting.

Auf wiedersehen, roomie who wears your clothes without asking, even though you’ve explicitly told her not to!

It may be better than putting up with exasperating drama queens, but holing up with your boo takes some getting used to.

10 Things That Change When Your Roommate Is Your Significant Other

Gone are the days of raiding your roommate’s closet when you’ve grown weary of your own.

Now if I want to borrow something from my roommate, it’s most likely because I’m attending a lumberjack-themed party.

Although I could probably coax Robert into shimmying around to Iggy Azalea with me while I do my hair, he’d rather relax on the couch with a cool brewski.

Asking for his opinion on outfits is also usually futile, but I have learned he isn’t a fan of rompers, or as he calls them, “Those dresses that are actually pants.”

Instead of speculating about who is dating whom, or the drama on the latest episode of the Bachelor, casual conversation now revolves around whether or not the dog has pooped today or what’s for dinner.

Although sometimes a girl just wants to gossip, Robert’s disinterest in it has taught me the value of keeping some dirt to myself.

Cheating on your joint television shows is a cardinal relationship sin.

We each have our own shows that we watch when we are home alone, but The Mindy Project and New Girl are sacred. (What can I say, Robert has a thing for adorkable heroines.)

This one is mostly on me.

Poor Robert wasn’t prepared to discover my hair rolling down the hallways, in his food and, much to his chagrin, in his various crevices.

Pink throw pillows and ruffled duvet covers may be all the rage, but your S.O. also needs to feel at home. Decorating to make you both feel comfortable is extremely important.

But you should still probably chuck that plaid comforter from his freshman dorm. 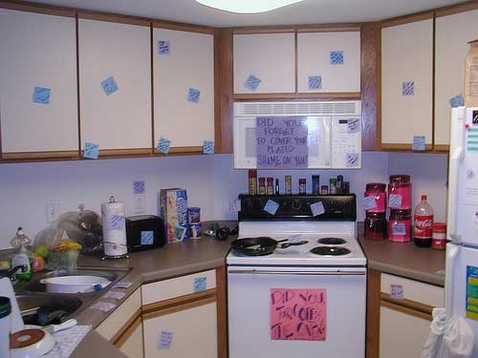 Leaving a passive-aggressive sticky note next to a neglected stack of dirty dishes may have been your go-to move in the past, but that’s not going to fly anymore.

Any chore-related frustration need to be dealt with directly to prevent it from turning into a bigger relationship issue. Or attracting mice.

After a while, a night in with our BFF pizza becomes more and more appealing.

Having a built-in date is great, but it also means twice as many weddings, birthday parties and holidays you are obligated to attend.

Luckily, Robert is happy to seize any opportunity to break out his sick moves, so I trot him out like a dancing monkey.

LOL (That means “laughing out loud.”)