A few weekends ago I returned from a long bachelorette trip to Harry Potter World to find that Robert had retiled our bathroom as an incredibly thoughtful and romantic surprise.

Unfortunately, he miscalculated how long it would take for the grout to set so that he could reinstall our one and only toilet.

For the next 24 hours we had to join TBone in the backyard whenever natured called.

This was not too much of an inconvenience for Robert, but as an elegant lady, I found crouching between the trash bins or behind the retaining wall to be less than ideal.

This is only the latest in 9 months worth of renovation adventures. 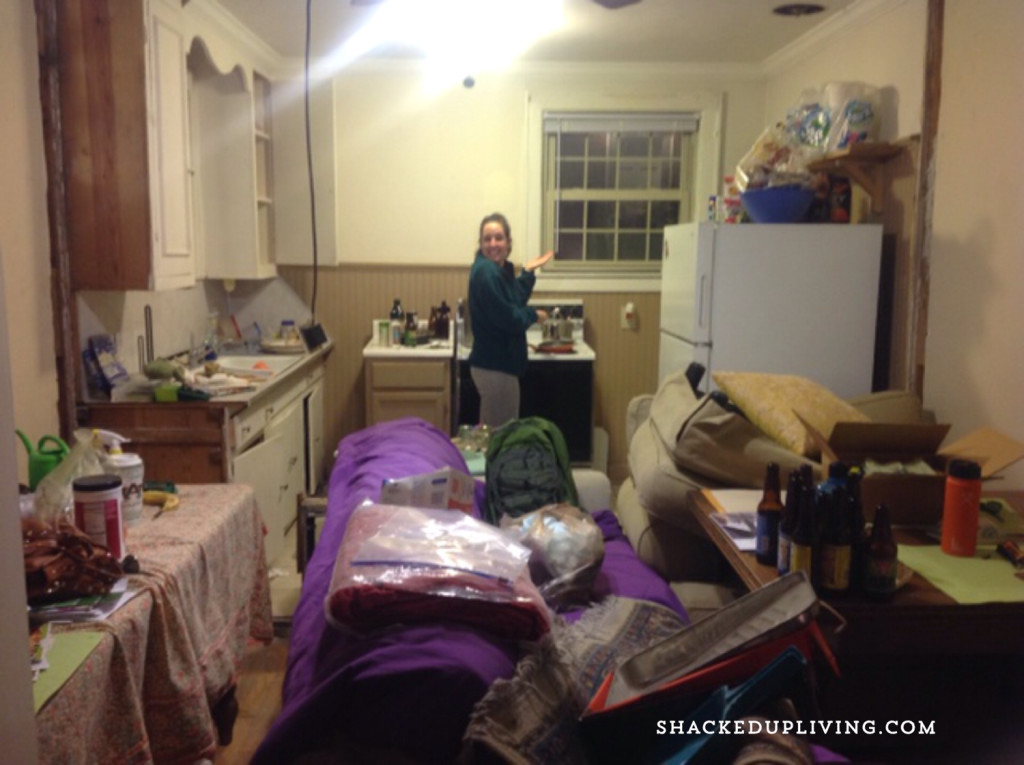 It was like camping, except indoors and not fun!

When Robert purchased Mustache Manor a year ago we took a wall down, which divided our tiny kitchen and dining room. Much to our dismay, we found asbestos and had to pay an exorbitant amount to have it removed by a professional.

Over the 4th of July weekend we decided to tackle the kitchen itself, only to discover termite damage and haphazard wiring. We took the kitchen down to the studs and were forced to do our dishes in the bathtub for 7 months.

Although it is still not finished, the kitchen finally has a sink and dishwasher so I no longer have to worry about having to sidestep a mountain of tupperware when shaving my legs.

Through all of the trials and tribulations of home renovations, Robert and I have certainly learned a lot about working as a team.

Practicing patience is one of the most valuable skills to have in a relationship. Especially when both of you are wielding power tools.

Don’t worry parents, your new neighbor only looks like he has to legally notify you of his presence.

Robert and I make a surprisingly great team when it comes to deciding on the changes we want to make to the house.

Robert’s engineering and construction background give him insight on the more structural and material-related decisions, while my artistic eye helps with decor and design.

To get his creative juices flowing, Robert downloaded the Pinterest app on his phone and we constantly share design or renovation ideas with one another.

Because his app is linked to my account, my Pinterest page is now a hodgepodge of things like “Top 10 Moves for Perkier Buns” and “Man Caves.”

We do disagree sometimes, but try to listen to each other’s reasons with respect and an open mind.

Right now we are debating the pros and cons of a glass shower stall versus a traditional tub/shower combo with a curtain.

I’m sure that after numerous rock-paper-scissors battles we will come to a compromise. 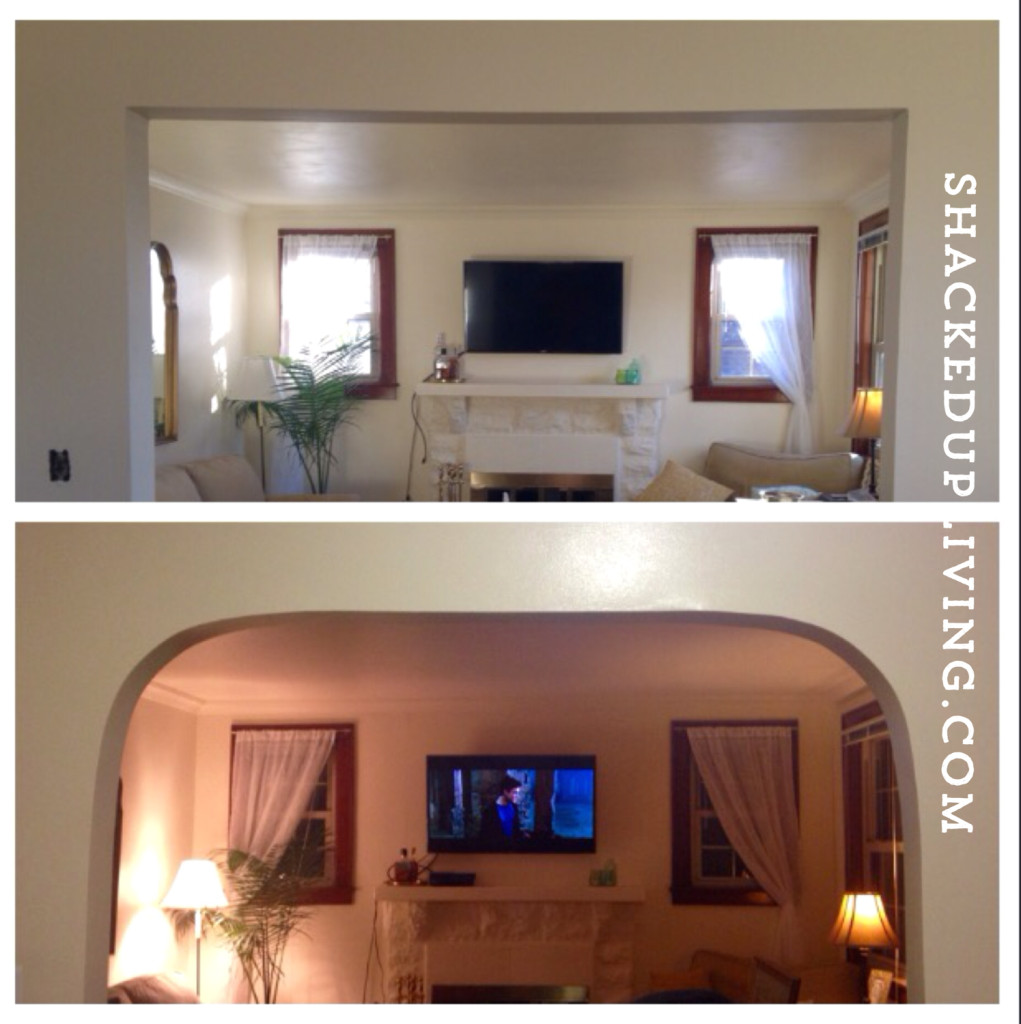 Got better arches than a foot model.

Learning from Each Other

I am proud to say that I can now add “drywall installation” to my resume and Robert has learned that “sage” is not just any color in the green family.

Our months of renovating Mustache Manor together have allowed us to teach each other and work as a more cohesive unit.

Under Robert’s tutelage I have graduated from simply fetching his tools to being trusted with drills, dry wall mud and sanding blocks.

I even installed an arch in one of or doorways sort of, kind of, almost by myself.

Robert is an endless font of knowledge, and far out-masters the cantankerous Home Depot employees he has befriended.

With my help, Robert has learned a lot about design and is developing his own sense of style. He has always had a good eye, but he is now learning the names for design features he likes, and figuring out what patterns and colors look good together.

He single handedly chose “Polar Star” for the bathroom and scoured the web until settling on “Lichen” for our kitchen cabinets.

We have both expanded our skill sets so much.

Now when we watch HGTV we can roll our eyes at the naïve homeowners as they take their first feeble swings with a sledgehammer or install a mosaic backsplash that totally clashes with their granite countertops. 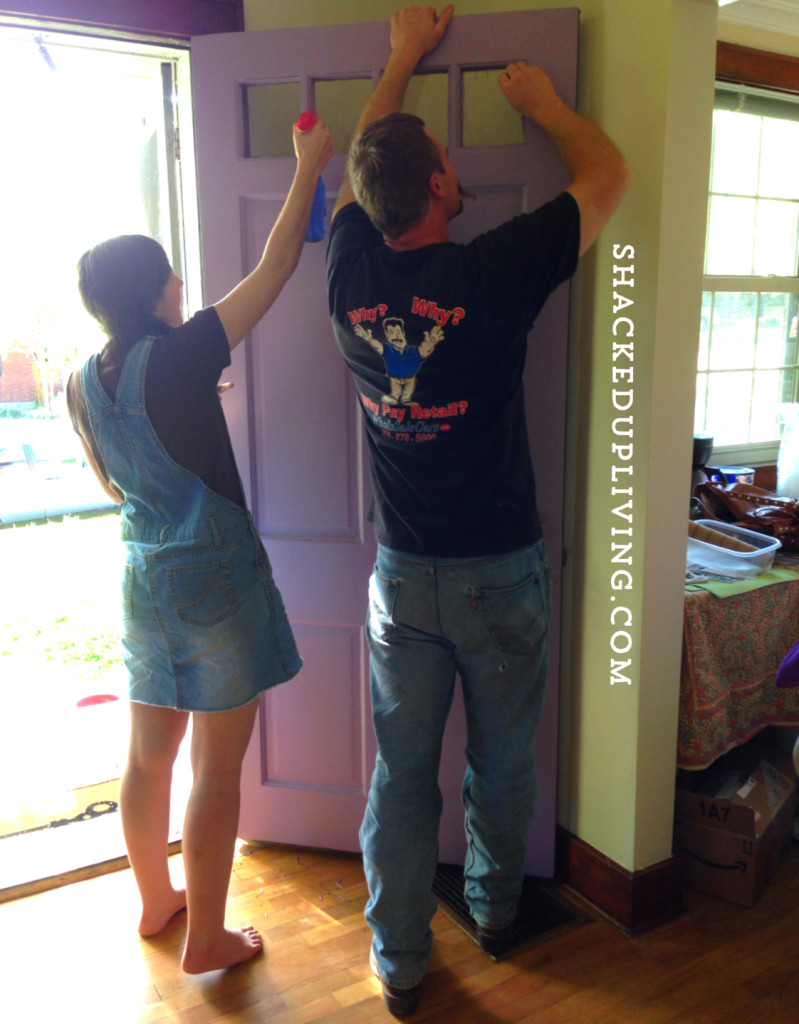 Patience is a Virtue

One of the reasons this renovation has taken so dern long is that my sweet, sweet angel man is an infuriating perfectionist. His OCD tendencies are constantly being aggravated by the sagging floors and crooked walls.

Instead of accepting that our floors look like they were laid by a drunk toddler and some of our walls resemble a fun house, Robert tends to just stare at the problem, cursing under his breath and wishing it were different.

I often want to shake him because berating the floor with hushed profanities won’t make it even, but I know that he takes immense pride in his work and I will only exacerbate the situation.

On the other end of the spectrum, my laid-back attitude towards crooked edges, and my less-than-precise painting skills drive Robert up a wall. I prefer to knock out a project instead of worrying about the little details.

When I was charged with painting the guest bedroom, I got one of my sorority sisters drunk and let her go to town with a paint roller.

Sure, there were a few drips and splatters, but Aubrey had a blast (Thanks, girl!) and our room was painted in record time.

We are both learning how to deal with each other’s particular styles.

I try my hardest not nag Robert for frittering away valuable time on things he can’t change, while he goes behind me and cleans up all the paint drips and uneven patches.

It’s certainly not a perfect system, but we are fine-tuning it as we go. 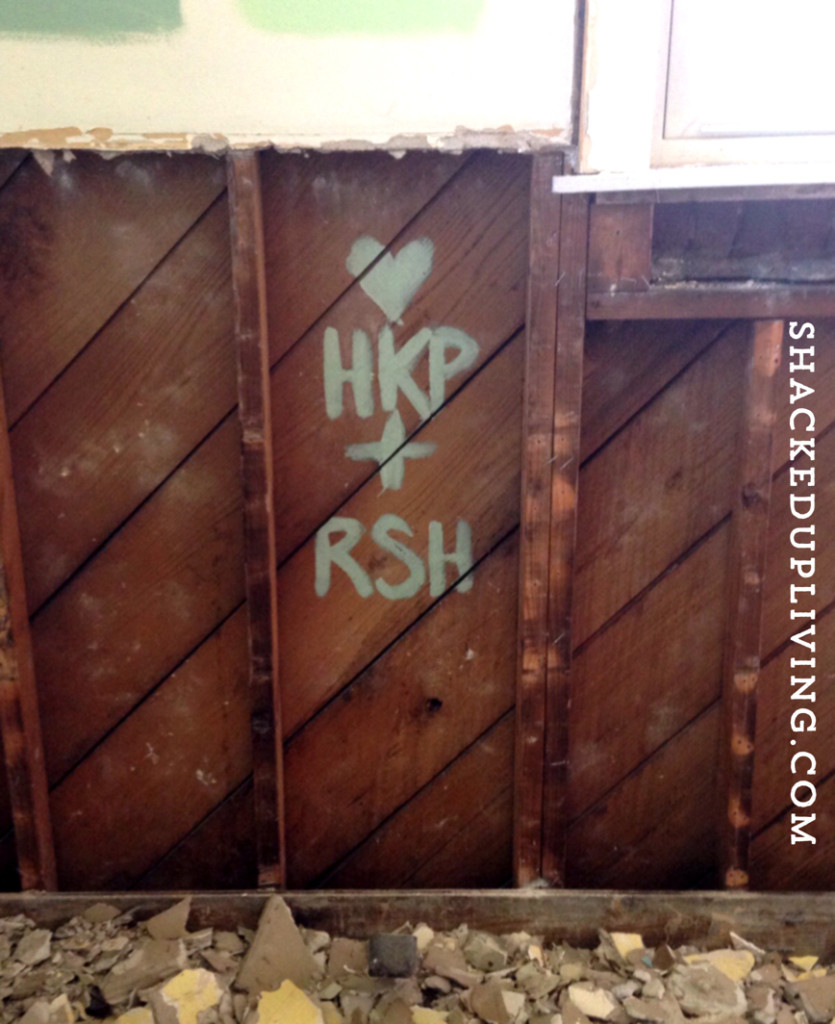 This renovation has been a royal pain in the hiney, and we still have a long way to go, but there is no one I would rather go through it with.

We may not be Batman and Robin, but we make a pretty good team and I have complete confidence that Robert could rock the heck out of a pair of tights.

Check back for more updates on the progress of our shacked up shanty! 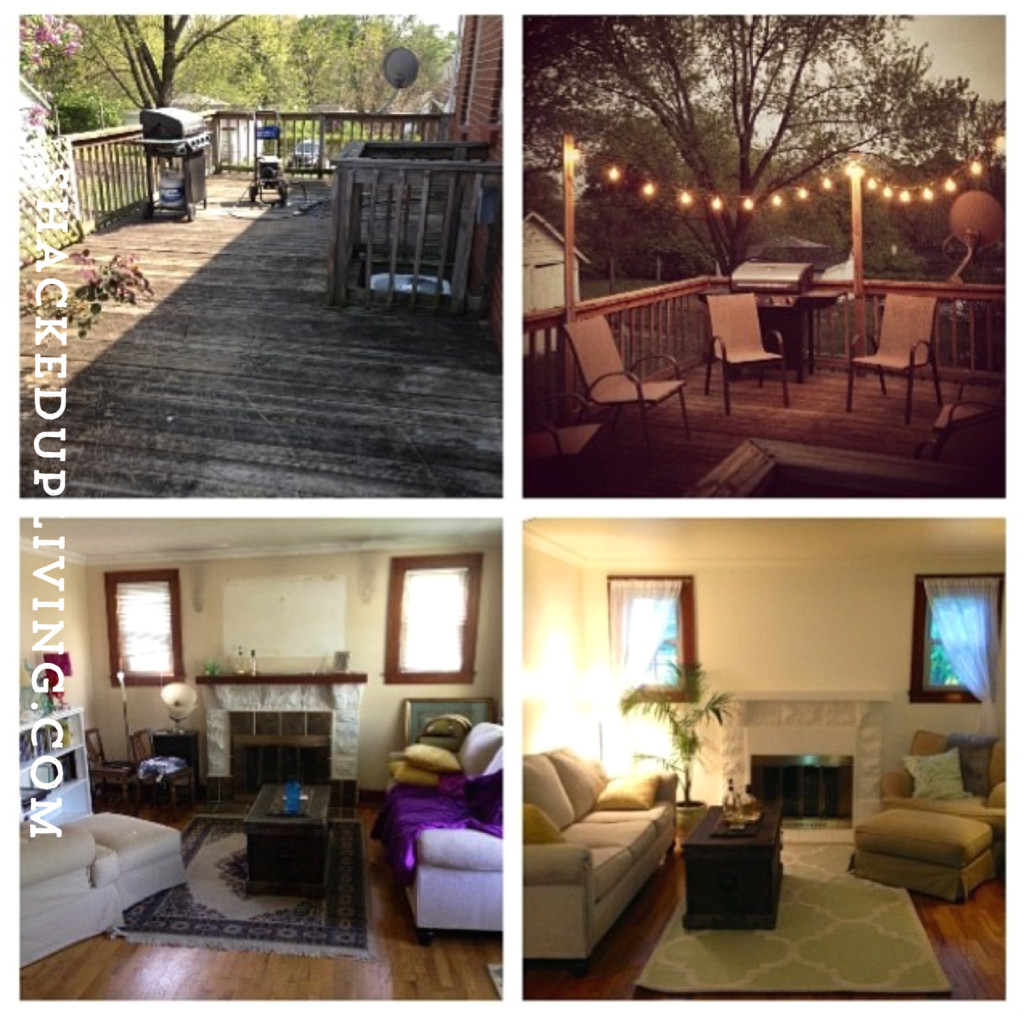 Deck and living room before and after. 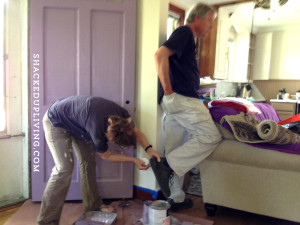 This was not the first or last time one of us stepped in the paint.

Special thanks to both sets of parents for their help getting this mess under control, and to Mama for helping to document the disaster!