Every bright-eyed girl has been advised, “He won’t buy the cow if he can get the milk for free.” by one female authority figure or another.

This argument is often applied to premarital sex or living together before marriage. While protecting your virtue is admirable, modern relationships are not always so one-sided. Does this guy know the first thing about cows? And more importantly, did you just call me a heifer?

Not to mix livestock metaphors, but living together is one way to find out real quick if you want to hitch yourself to someone else’s wagon for life. After all, when buying a cow, returns are extremely pricey, and may include half of your worldly possessions.

“He won’t buy the cow if he can get the milk for free.” – Everyone’s grandmother, ever.

My personal experience began after college graduation, when my long-distance love, Robert, and I decided we had enough of FaceTiming and three-hour treks to each other’s cities, resulting in permanently numb hindquarters.

A few months later, Robert landed a job in my city and we began to plan our future together.

I bottled up my mounting questions about his intentions, until one weekend, as was my habit regarding delicate subjects, I became inebriated and tactlessly confronted him about whether or not he planned to make an honest woman out of me.

His response was something along the lines of, “Well, duh.” 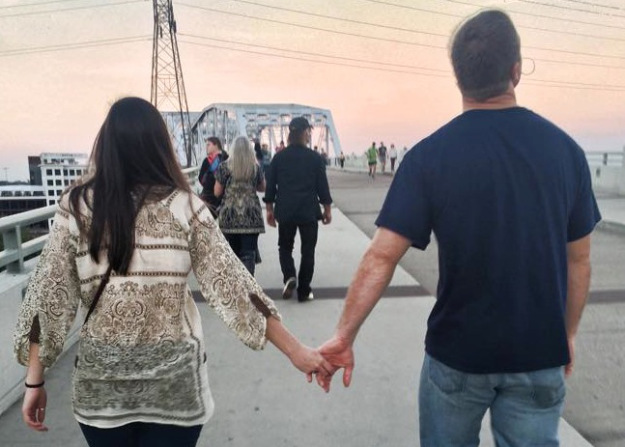 Walking off into our sinful sunset.

Pleased, yet feeling the need to emphasize my worth, I informed him that I would not be living with him until we were married. After living with my unpleasant roommates for a few more months, my demands dwindled to at least being engaged. It was only when Robert bought a quaint fixer-upper and my living situation became unbearable, that I finally packed my bags and launched myself into the weird world of cohabitation.

On one hand, my decision to live in sin with Robert was a pleasant alternative to living in a roach-infested shanty with three girls and only one full bathroom. But in truth, moving in together was an opportunity to deepen our already strong relationship, and make sure that we wouldn’t murder each other in our sleep, should we become shackled to one another for life.

Lord knows we both have our flaws, but almost a year later, the future looks bright, and I haven’t smothered him with a pillow.