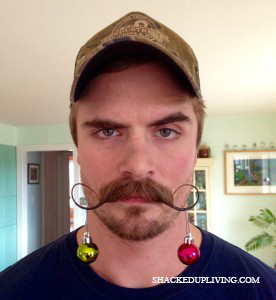 My boyfriend has an epic mustache.

No matter the party we attend, the bar we enter or even the gas station we pull into, someone will point at Robert’s face, mouth agape, and exclaim, “Duuuuuude. That is an EPIC mustache!”

Normally, these run-ins are followed by polite requests for photos or grooming tips. But in downtown Nashville, the unofficial southern bachelorette party capital of the world, things get a bit aggressive.

Many a flock of women have surrounded my burly man, and thrown themselves into his arms for a photo with him and his stellar ‘stache. Often they will march straight up to him and tug on his handlebars, just to see if it is fake.

Instead of getting jealous and throwing ‘bows at these bedazzled bridezillas, I chose to step back and watch with amusement as he fends off his admirers. Interpreting the drunken flailing of the opposite sex as a potential threat would be a waste of energy. It’s almost like dating a famous musician, except all the groupies have on matching tutus.

One of the integral parts of living with your significant other, is giving them the time and freedom to do what they want and be who they want. If you are constantly fearful that they will stray, your loving embrace will quickly become a chokehold they are eager to escape.

Being secure and trusting prevents many unpleasant arguments about where they were, who they were talking to and what they were doing. Keeping communication honest, and dating someone you trust fully will make your life much easier.

Quite frankly, if you are considering settling down with someone whose texts you read in secret, then you should think again.

Robert and I both do our best to rebuff any inappropriate advances we may receive from strangers, and keep a sense of humor when the other gets hit on. We chose to think of it as a compliments to our good taste when one of us gets macked upon, within reason. We trust each other fully, but let’s be real, I would still cut a snitch if she were to steal a kiss, and he would lay a fellow bro out if he copped a feel.

I really should just start charging for photos. 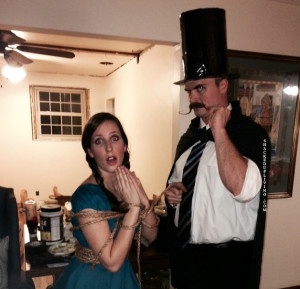 Finding mustache-friendly couples costumes is harder than it seems.

Jealousy is not just relegated to the romantic realm. Allowing your love to find fulfillment in friendships outside of your relationship can be tough.

Sometimes it is hard to sit at home in your footie PJs (Wait, is that just me?) and know that your boo thang is having a blast without you, but you have to move past the FOMO (fear of missing out) and be happy for them.

But a girl’s night here, and a poker night there are just the ticket for maintaining emotional stability. It also prevents you from getting sick of your darling’s beautiful mug.

When Robert and I have an evening apart, we usually touch base every few hours, but only so the other knows we are safe. Don’t blow up your significant other’s phone with philanderous accusations based on the fact that they haven’t responded in the past 15 minutes. Their phone is probably on vibrate.

At the same time, when you are out, respond to your text messages so they don’t think you are dead.